(Postponed from 3rd March due to bad weather and rail strikes) 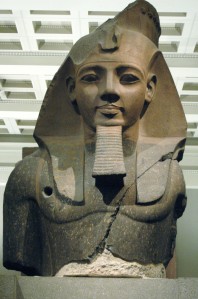 Ramesses II at the British Museum

Ramesses the Great – Pharaoh of the Exodus?

Ramesses II was one of the greatest and most powerful of the pharaohs. During his 67 year reign he built more temples, erected more colossal statues and sired more children than any other Egyptian king. His inscriptions tell us about his great victories over the enemies of Egypt: the Hittites, the Nubians and the Libyans. He expanded Egypt’s empire, secured the borders and established the first major peace treaty in history. He was revered by later kings, and became the ‘Ozymandias’ of classical legend.

But was Ramesses the pharaoh of the Exodus? Did he enslave the Israelites and suffer the ten plagues of the Bible? Can we believe the king’s propaganda – does Ramesses “the Great” truly live up to his name?

Join Michael Tunnicliffe and Sarah Griffiths as they investigate, using evidence from Biblical and Egyptian sources to explore the life and legacy of Ramesses II.

This site uses Akismet to reduce spam. Learn how your comment data is processed.